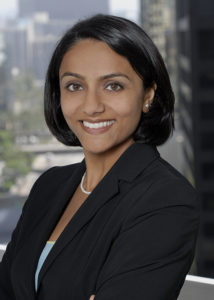 Arti L. Bhimani represents companies and individuals in complex litigation and arbitration matters, including in the substantive areas of personal injury, consumer protection, qui tam, fraud, breach of fiduciary duty, toxic tort, and breach of contract. She has experience handling matters in federal and state courts and before arbitrators and administrative agencies. She has been recognized for her work by the California Super Lawyers magazine.